The music video for the title track from the forthcoming album Out of the Storm has been released to YouTube.
The video tells the story of a Policeman that becomes a zombie. The footage was taken from the cult classic film Plan 9 From Outer Space. You can watch the entire video below, or watch it on YouTube and subscribe while you’re there for more fun content.

Out of the Storm will be released on all streaming platforms on the 5th of October, 2021. 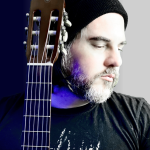 film clip Music music video Out of the Storm Video